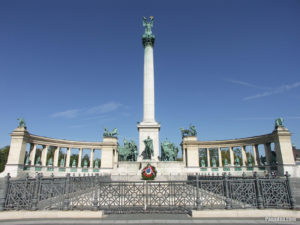 Popular and widespread belief, that the Millenium Monument on the Heroe’s Square of  Budapest was built for the Millenium Celebrations in 1896, when Hungary celebrated the 1000th anniversary that its ancestors found a place to settle down in the Carpathian Basin. In fact, only the decision, that a monument must be erected here was enacted during the celebrations (similarly, monuments were decided to be built on all the notable places of the historical Hungary connected to the events of the conquest and state-foundation, like Ópusztaszer, Verecke-pass and Mukachevo).

The centerpiece of the Millennium Monument is the triumphal column that rises to a height of thirty-six meters (118 ft) above Heroe’s Square. At the top of the column stands a statue of archangel Gabriel, holding a crown in his right hand, and a patriarchal cross in this left. According to legend the archangel appeared to the Pope of that time, to advise to saned a crown to Hungary. The legend symbolize, who Hungary became a christian kingdom in 1000. 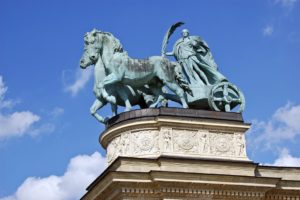 At the base the column is surrounded by seven equestrian statues of ferocious looking warriors. The statues depict the Magyar chieftains who, led by Prince Árpád, settled their people in the area now known as Hungary.

The 38 m high Corinthian column – which dominates the square today – was stood up only in 1901, while the colonnades behind were placed between 1901 and 1931. The square, as we see today was built for 30 years. The statue of archangel Gabriel on the top of the central column, and the equastrian statues of the chieftains of the seven founder tribes of the country around it are the works of György Zala. The composition won Grand Prix on the World Exhibition held in Paris in 1900 and as the first piece of the Millenium Monument was erected in Heroe’s Square Budapest in 1901. 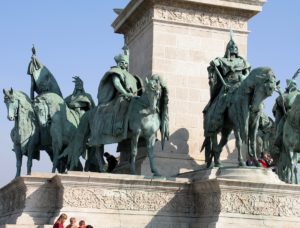 Two majestic quadrant colonnades serve as a backdrop for the Millennium Column. Between the colonnade’s Corinthian columns stand statues of fourteen of the most prominent figures in Hungary’s history, starting with King Stephen I on the left and ending with Lajos Kossuth on the right. Below each statue is a relief that depicts a historic scene related to the respective figure: kings, suzerains and heroes look down on us. Originally the right side colonnade gave home to Habsburg emperors and empresses, as at the time of the monument’s building Hungary was part of the Austrian-Hungarian Monarchy. Today we see the figure of John Hunyadi, Corvinus Matthias – one of the biggest kings of Hungary in the 15th century-, István Bocskai, Gábor Bethlen, Imre Thököly, Ferenc Rákóczi II and Lajos Kossuth, who were all leaders and heroes of several revolutions againts the Austrian rule here.

In the lefthand colonnade the statues – Saint Stephen- founder of the christian Kingdom of Hungary, Saint Ladislaus, King Coloman, Kind Andrew II- the Hungarian crusader king, King Béla IV, Anjou Charles Robert – who established the first royal towns and minted firstly Hungarian forint in golden coins,  and Luis the Great, founder of the first Hungarian university – are the original ones.

Atop the colonnades are allegorical sculptures. The biga (two-horse chariot) on the left colonnade shows a male figure holding a snake, symbol of War; the sculpture group to the left shows two figures who represent Wealth and Labor. On the right colonnade stands another biga with the figure of Peace; at the other end is a sculpture group with two figures representing Knowledge and Glory.